Telecom
Case Studies
See how we develop custom PR strategies
PR Blog
Our blog shares knowledge across the marketing spectrum
PR E-books
For us, sharing is caring. Download our industry insights
Our Philosophy
We like to do things differently at PRlab
PRLab Careers
Excelling for our clients with the right people
Our Clients
We work with different clients across multiple industries
Our Events
Understand the challenges and trends shaping modern PR
Our Team
We're a diverse international marketing and communications team
The PR Paradox
"The PR Paradox" looks in depth at PR today

As an applicant tracking system (ATS), their platform provides organization to the hiring process and promotes a collaborative hiring method.
400
Publications
3
Press Pitches
01
Press Coverage
02
About Recruitee
03
PRLab strategy
04
Testimonials
05
Get in touch 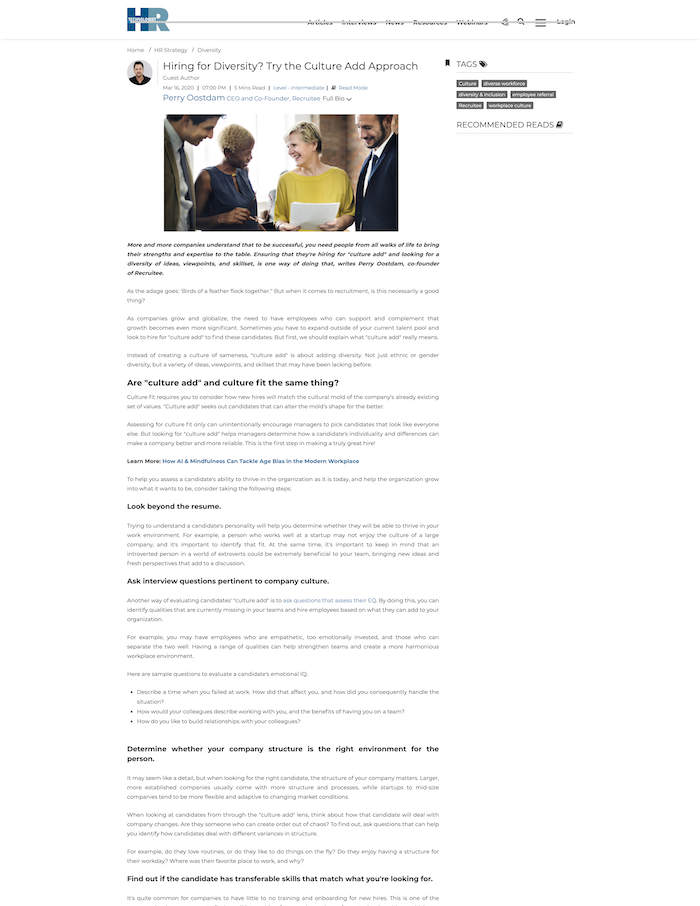 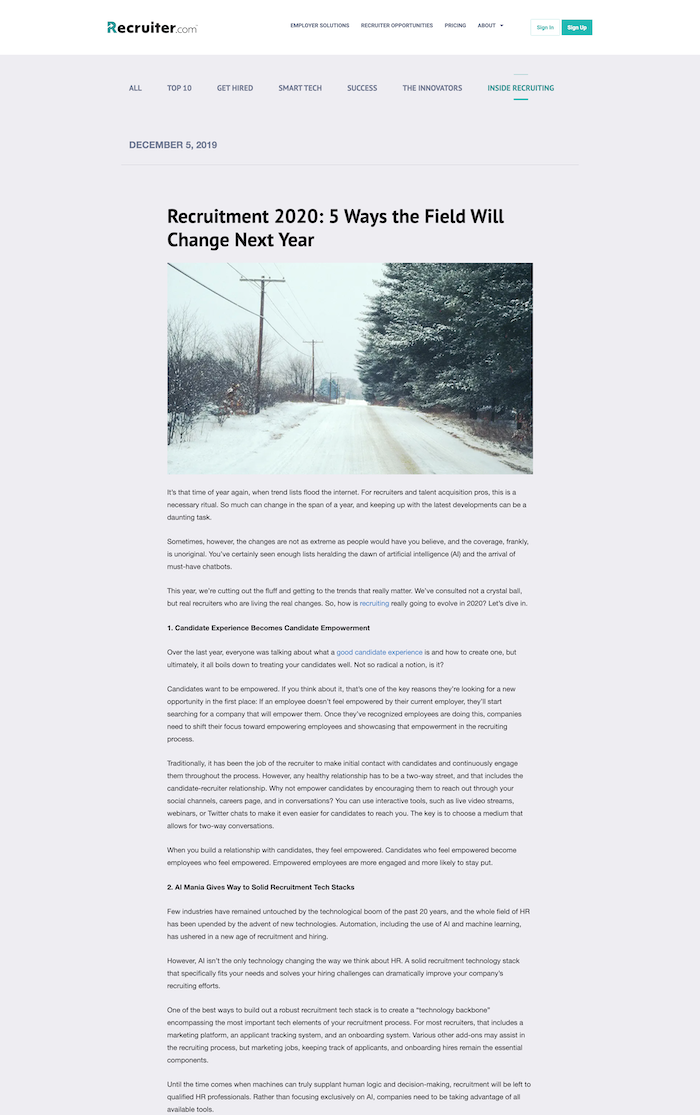 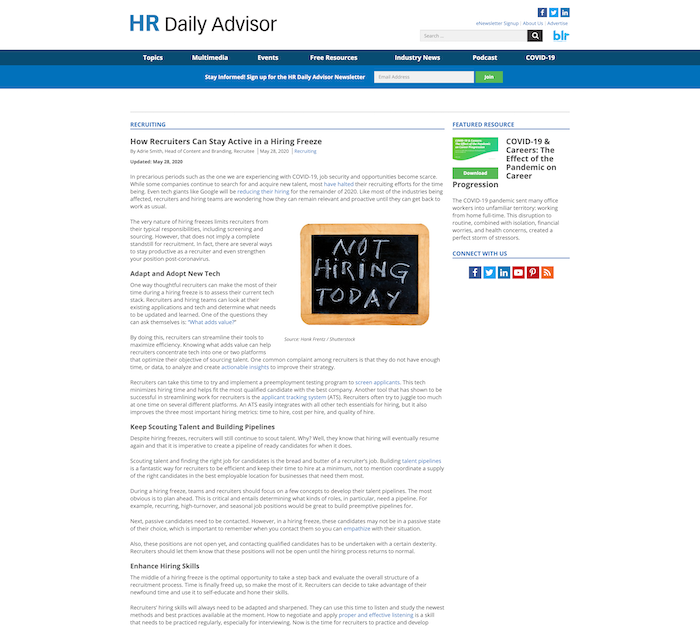 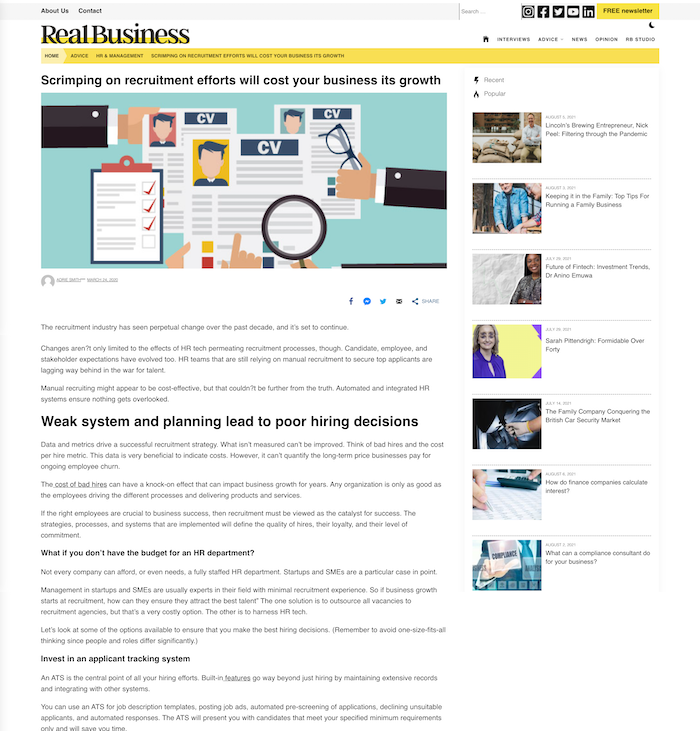 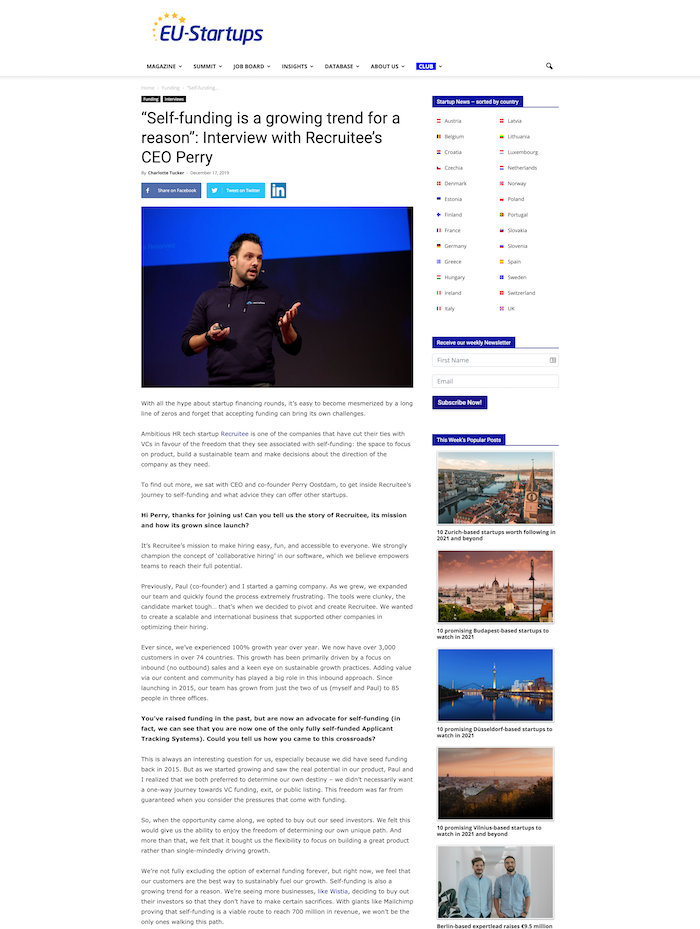 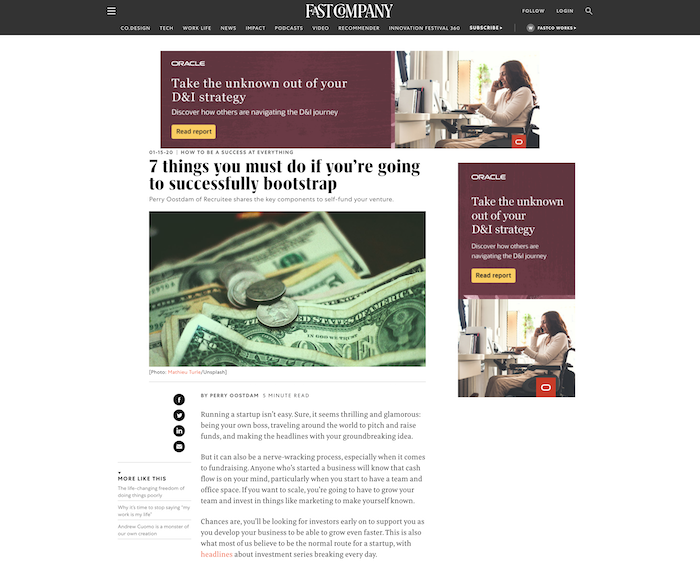 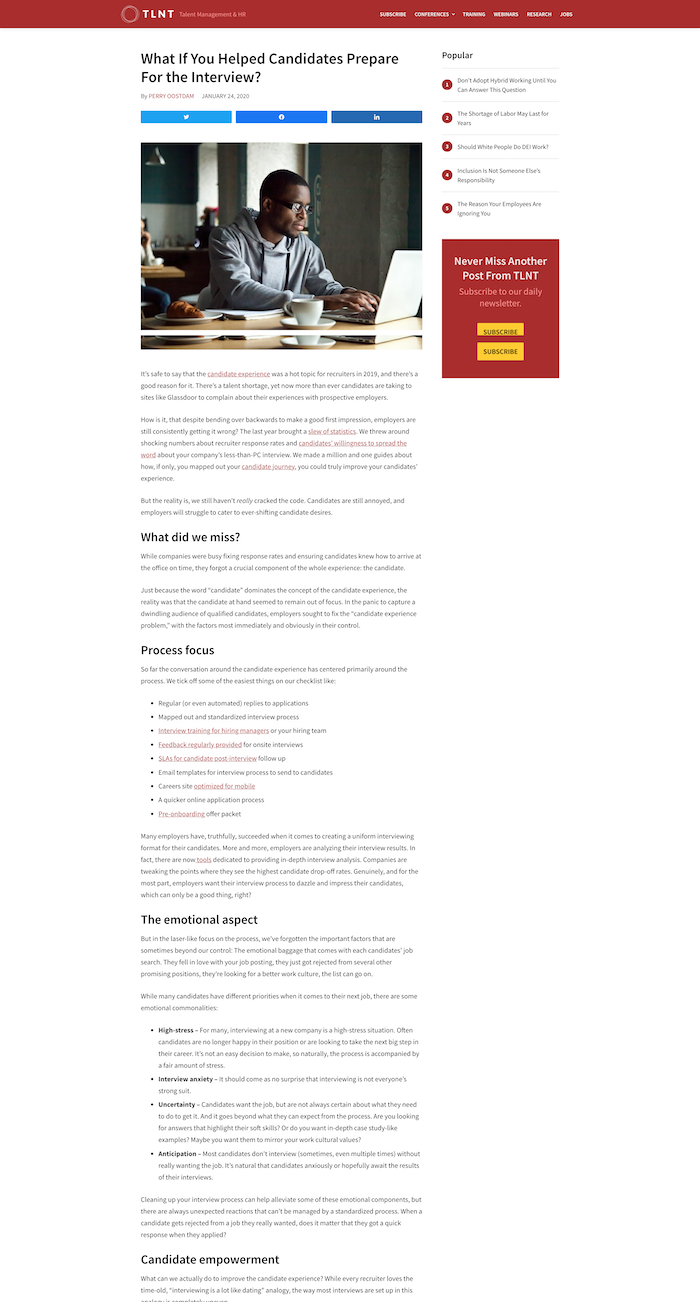 Recruitment Software - Talent Acquisition Platform
Every team is excited to hear that the team will be growing. All of those tedious tasks that are extra on top of our typical roles will finally go to someone designated to complete them. While the team celebrates this joyous occasion, the management teams are a bit nervous. Hiring a new talent who may not be the right for the position can be a serious setback. Are they the right culture fit? Do they have the prerequisite knowledge? Without the right hiring process in place, these questions are all too often decided by the flip of a coin.

Recruitee recognized these issues and decided to lend a hand. As an applicant tracking system (ATS), their platform provides organization to the hiring process and promotes a collaborative hiring method.

Being a solution to a serious problem for companies, Recruitee began growing quite quickly and before they knew it they were internationally successful with major clients like Starbucks, Toyota, and Vice. At the point they became one of the leaders in industry, they realized it was time for their voice to be heard.

PR had not been their focus previously, but they recognized that this would be the key to their long term success. With the desire to establish themselves as thought leaders in the HR industry and increase the external backlinks to their website, Recruitee reached out to PRLab for assistance.
1
Research Phase

Learn More
When PRLab first began to work with Recruitee, they were new to public relations. Never having a real PR team, they weren’t being featured in the press, other than a few small local publications. However, due to their international growth, they wanted to increase their newsworthiness, become a thought leader in the HR industry, and gain external backlinks.

To accomplish these goals, PRLab had to conduct thorough research to figure out what made Recruitee interesting to recruiting publications. It was discovered that aside from solving some issues such as organization in collaborative hiring and unconscious bias, they were also a completely self funded scaleup. This made Recruitee unique to not only the HR and hiring world, but also the business world as well. So immediately after the research phase, PRLab began creating stories for the press and sending them to journalists.

LEARN MORE
PRLab understood that being a business that is rapidly scaling internationally, while being self funded and financially stable was a rarity in today’s market. That is why the first of the three stories created on behalf of Recruitee focused on the different steps startups could take to become self funded.

Given the high level scope of the story, the aim was to get coverage in a publication who had a high monthly audience. A media tier list was created and from that list, a handful of carefully selected media outlets were chosen for the story. The pitch was offered exclusively to further attract the larger publications. This technique provided fantastic results as Recruitee was featured in FastCompany and EU Startups.

Following the focus on the business management side of things, PRLab began diving into Recruitee as an HRtech software. There was a reason why major clients like Starbucks, Toyota, and Vice have been singing their praises, but the key was translating this into stories for journalists.

Scouring newspapers, magazines, and online publications; PRLab had a great grip over the news values in the talent acquisition and recruiting world. So with the unemployment rates at the time being at an all time low in the US, the focus was set on helping companies attract talent in a candidate driven market. Once again, results were instantaneous. Articles were featured in TLNT, Online Recruitment Magazine, HR Technologist, Real Business, and many more.

Then, when the news values began shifting with the strike of the Covid crisis, so did PRLab’s focus. No longer could the focus be set on the war for talent, with unemployment rates skyrocketing. So taking advantage of this, PR did a bit of news jacking on the global hiring freeze. Journalists were eager to have someone provide input on these topics and articles ended up in the HR Daily Advisor, HRNews, ITProPortal, and the Silicon Canals.

LEARN MORE
Right after business began closing due to the Covid crisis, PRLab and Recruitee decided it would be the perfect time to conduct an industry report on the state of hiring to position Recruitee as a source of fresh information in the recruitment space.

To begin, PRLab created a detailed survey looking to bring to light exactly how recruiters and hiring teams were adjusting to remote hiring and how their processes have been affected. The survey was then distributed globally, with the results proving quite fruitful. It turns out that the companies who were still hiring, were suffering from severely delayed processes due to not having the proper policies in place and a lack of technological updates.

While Recruitee worked hard on turning this data into a report, PRLab began building a press release and 3 different press pitches for journalists. That way when the report was finished, it could be sent to select journalists with a personal touch.

After the industry report was finished, it was sent out to almost 400 publications. These efforts resulted in an article exclusively being published in Online Recruitment Magazine, provided data for several other pitches, and helped establish Recruitee as a leader in the recruitment industry. 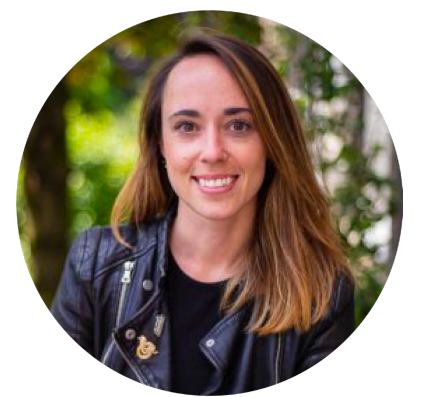 Head of Content and Branding of Recruitee
“Our collaboration with PRLab’s really broadened our perspective on the benefits of having a good PR strategy in place when growing your brand awareness as a tech startup. Also, our working together felt more than just a PR agency - client business relationship. For the duration of our collaboration, PRLab’s really became part of our brand team"

More information about our PR services 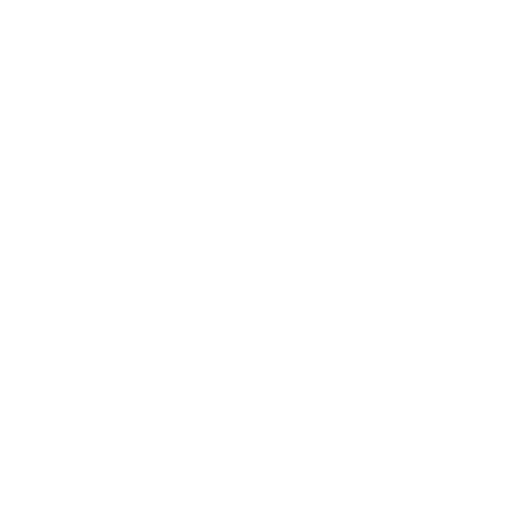